I admit it: I'm one of those annoying folks who almost always end a sentence in a emojis. 😂 Chat with me for any length of time and the probability of you getting hit with any emoji is swiftly approaching 100%.

Naturally, I do use emojis (or smileys or emoticons - whatever you like to call it) in my emails as well. I think it helps me convey my personality.

I'll lead with some semi-sober reasons to use emojis and then I'll tell you how I miserably failed doing so.

Reasons to use emoticons in emails

If you ask me, there are a ton of reasons why you should use more emojis in your emails - especially in your subject line. But then again, I'm the one with an emoji addiction. ¯_(ツ)_/¯

I have only anecdotal evidence myself on this topic, but according to a - sadly - no longer available report by Experian 56% of surveyed brands reported increased open rates for their emails with emojis in the subject line.

Get noticed in the inbox

Look at this picture and tell me which of the four items immediately grabs your attention.

It's the one with the "pointing finger" icon - isn't it? Case closed.

Emojis were developed to bring emotions across in non-face-to-face conversations. Whether online chats, text messages, or email: They all suffer from a lack of facial expressions that give us so much context. Is she joking? Is he sad? Ecstatic? Exhausted? In love? Bored? Indifferent?

You can convey these emotions (and more) with icons - until we finally get that VR chat going, dammit!

On mobile you get maybe 30 characters in the subject line - max. Everything beyond that is truncated and doesn't help you get your message across.

So instead of wasting valuable space, you can use icons. Try these:

Things can go shockingly wrong when using Emojis in emails

I started using Emojis in my emails, after I saw Justin Jackson use them in his emails. I think at one point 3 out of 4 of the subject lines in my evergreen content campaign had an emoticon in them. That's how crazy I went with the smileys.

And everything seemed really great. I mean look at this genius usage of an astonished face emoji:

Pure genius - right? Yeah, until I sent a test email to look at it in GMail: 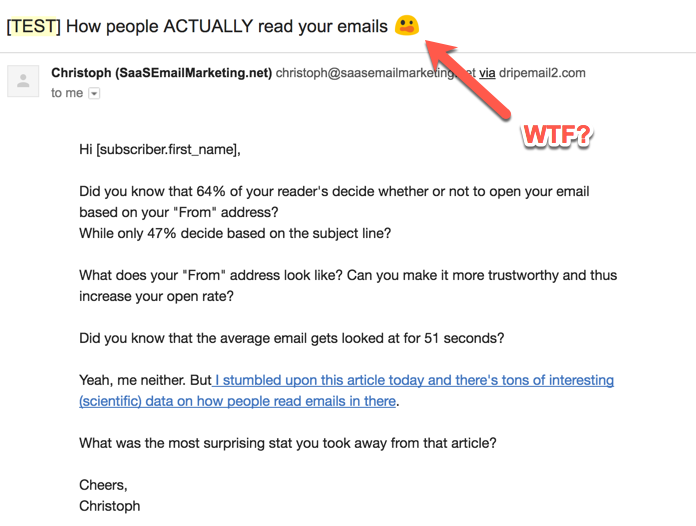 Man, was I shocked when I saw that! And it gets worse: By the time I realized my mistake I had been sending this sorry excuse of a smiley to hundreds of readers!

Which goes to show that you must test your emails!

Anyways, how could I have avoided that mistake?
Quite simple. There's an excellent website called Emojipedia.org, that lists all available emoticons PLUS their representations in various environments - such as Facebook, Twitter, and Google. 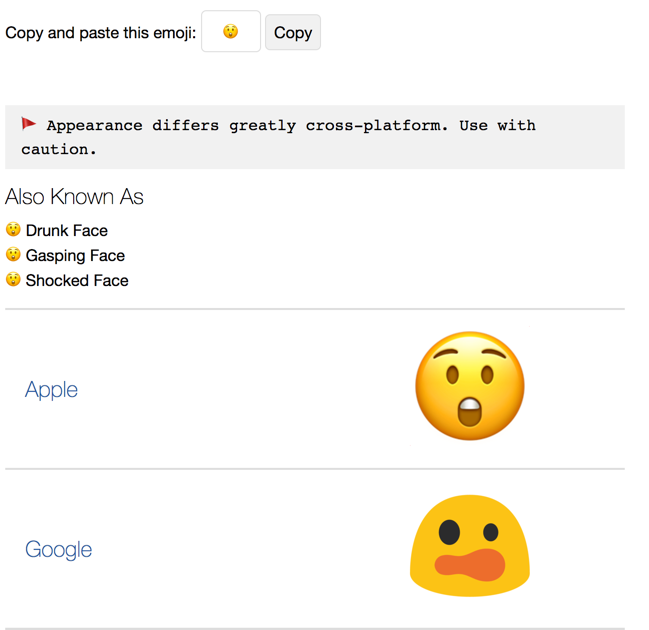 One look at this page could have prevented the disaster.

Be smarter than me: Look your emojis up in Emojipedia before putting them in your emails

Your business should be enabling your dreams

Your SaaS business should enable you to live the life of your dreams, not give you nightmares. Yet most SaaS products don't make enough to go full-time on it.
Crank up your SaaS growth to 11 with the right email marketing & automation workflows. Sign up and learn how to:

I've been making things with computers since 1998. I went into business (as a freelancer) at age 19 and have since launched multiple profitable products. Lately, I built LinksSpy.com and wrote the SaaS Email Marketing Handbook.

I live near Munich, Germany with my wife and a son. For fun, I ride bike, read books, and hike in the Alps.

P.S. Enter this contest to win a copy of the SaaS Email Marketing Handbook!

5 Email Marketing Tactics that will make you sweet $$$

If you could increase your signups by 15% while decreasing your churn rate by 40%, how would that change your growth trajectory?

Asked another way: What color would your Tesla be?

Learn to improve your retention, double your MRR, win back lost customers, and much more in my email crash course